Click here to go to the Ugly Fruit and Veg Directory 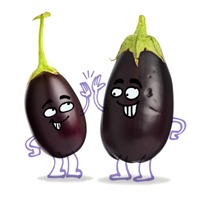 Aldi (@AldiUK) does sell some "wonky" veg.  Click here to learn more.  And tweet them or  email them here to ask for more.

Asda (@Asda) the number two retailer started a line in 2009 that was targeted for home chefs.  Find out more here or specifically about carrots, here.  Asda made biggest splash in the wonky (ugly) market of all when Jamie Oliver promoted their "Beautiful on the Inside" line, which started in late January, 2015.  Read more about the program here and here.  Asda was so pleased with the trial that they extended the range in November of 2015. Read more about that here.  They also started a wonky veg box that's in stores once a month all around the U.K. In January 2017 they announced the box would reach more stores and the box was named Product of the Year as well! Ask them to make it happen more often by emailing them.

Morrisons (@Morrisons) (the number four retailer) started M Savers in 2012, incorporating uglies into various products, due to weather factors and to help "ensure British crops are not wasted."  Read about it here and here.  Or you can shop M Savers online here.  After some work by Chef Hugh Fearnley-Whittingstall to expose a less than stellar program at the retailer, Morrisons start a full range of wonky fruit and veg. Then in the Fall of 2017, they started a wonky veg box as well.

Basics from Sainsbury's (@Sainsburys) the number three retailer started in 2012, you can read more about it here and then here.  Or go straight to the retailer here.  At one point, before the EU lifted restrictions on cosmetic standards, Sainsbury's was selling it's "scarry ugly carrots" at Halloween.  Read about that here.

The Co-operative (@CopperativeFood) is selling some "wonky" veg.  Click here to learn more. And tell them you want to see more by tweeting them or emailing them.

Tesco (@Tesco) the number one retailer started selling way back in 2008.  You can read more about it here.  They are selling seasonal boxes here and are incorporating wonky veg into their Everyday Value range. Tesco announced they'll be selling a full line of about 15 types of "ugly" veg in the Perfectly Imperfect range.